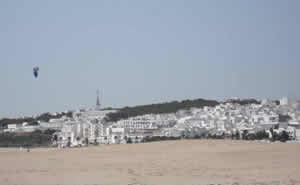 Conil is located on a coastal plain southwest of the province of Cadiz, bathed by the Atlantic Ocean. It is about 43 kilometers from the capital. In its most eastern situation dominates the plain, being its most western part cliffs among which stands out the Roche. It is part of the region of La Janda. Conil borders the city of Chiclana de la Frontera to the north and Vejer de la Frontera to the east and south. To the west it borders with the Atlantic Ocean.

Although human presence is already observed in prehistoric times, the town of Conil was founded at the time of the Phoenicians, who took advantage of the exits to the sea of ??the area, creating their fishing nets and fisheries. Already in times of the Romans acquired splendor and greatness when being part of the Route Herculean and to unite the cities of Málaga and Cádiz. After the fall of the Roman Empire, Conil was sacked by the Visigoths, the Byzantines and the Vandals until, with the arrival of the Muslims, in 711, it had to join the Cora of Sidonia. There is no significant news of the municipality until 1265, a year in which the municipal term, due to the Christian victories of the Reconquista, renombrra the town, adding the toponym "de la frontera", as it did with other towns like Chiclana , Jerez or Arcos, because the towns formed part of the border that separated the Muslim territories from the Christians. In 1299, King Ferdinand IV granted Alonso Perez de Guzman the then conilian village to repopulate and strengthen it, collaborating in its new peak. It was in these times when the town was renamed Torre de Guzman, because of the tower that, to defend the city in case of attack, built under its name.

Despite plague epidemics and other diseases that the people suffered in later years, the almadrabas served the inhabitants as the basis of their economy. At the beginning of the sixteenth century, the life of the people is interrupted by the disputes between two noble and extremely important families of the area: the Guzman and the Ponce de Leon. Along with this, the disputes between the nobles and the villagers worsen the situation of the zone, since they seemed to these bad seconds the economic conditions that they were forced to live. After all these problems, the subsequent decades were bearing fruit as the population and the production of the traps began to rise.

It was the seventeenth century the golden age of the population, as it became an economic enclave of the surrounding area. Already in the eighteenth century, the almadrabas begin to decline, but not for that reason the economy, which begins to be sustained thanks to agriculture and livestock. In the middle of this century, a series of disputes due to the fiscal pressure to which land owners and villagers again disturb the peace of Conil. These problems of both territories and money are what drove the popularity of the town in droves, to which was added the Napoleonic occupation of the early nineteenth century. The people, who at that time had an anti-senorial feeling, created the Síndico Personero, a kind of ombudsman thanks to which the municipalities of the area were able to confront the owners of the lands. During the twentieth century, tourism, to a much smaller extent than the current one, begins to make a dent in the locality, because Sevillian families begin to leave this area to spend medicinal baths. Since the 60's, Conil has had a tourist boom due to which this is the sector that has supported the people in recent years.

Celebrations in honor to our Virgen de las Virtudes, patron of the town. A fair is celebrated around the 7th to 11th of September, being the 8th of September the day of the patroness. Virgen del Carmen, patron saint of fishermen. On July 16, after a mass, the Virgin goes out to sea in a procession, escorted by local boats. Romería of San Sebastián, patron of the town. On the Sunday closest to January 20, the saint is transferred from the village to the pine forest of El Colorado, accompanied by the locals in floats and on foot. Spring Fair of El Colorado. In the first week of June the horse is the protagonist as well as the typical dishes, the products of the orchards of the area and the farm work. May Crosses. This day the neighbors decorate crosses that they themselves perform, participating in a contest. Carnival. Dances and costumes competitions are held. Easter. Processional parades, steps and arrows sung by the people. San Juan's bonfires. On the eve of San Juan, "Juan and Juana" are burned. Saint Catherine of Alexandria. Procession of the Santa through the streets of the town.

Our accommodations for rent, villas, townhouses and apartments or independent.

Spend your holidays in Conil, enjoy its beaches, pine forests, its gastronomy and its festivals.

Book your accommodation, choose by type, dates or availability, number of people, ...

Conil is located on a coastal plain southwest of the province of Cadiz, bathed by the Atlantic Ocean. It is about 43 kilometers from the capital. In its most eastern situation dominates the plain, being its most western part cliffs among which stands out the Roche. It is part of the region of La Janda. Conil borders the city of Chiclana de la Frontera to the north and Vejer de la Frontera to the east and south.

Activities in Conil.
Conil offers a wide variety of leisure activities for your free time. Excursions on horseback, by the beaches of Conil and pine forests of Roche, activities and classes of surfing, routes by bike or hiking, ...
You can also enjoy its wide gastronomy and of course, its festivals.